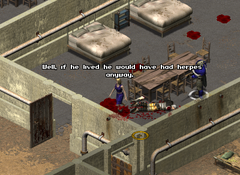 Jeff, stopped by the Warrior and now lying dead in a pool of blood

“You bite me again and I'll bite you back!”

Jeff Dougal is a member of Guldo Sciavo's gang in Cold Water in 2197.

Jeff Dougal is your typical wasteland thug. He is a member of Guldo's gang and he is doing what the bad guys do that make them bad guys.

He tried to rape Adele Dudley but he was stopped by the Warrior and killed on sight.

Jeff is not named in game, being just one of many of Guldo's men. His name can be found in the game's data files.