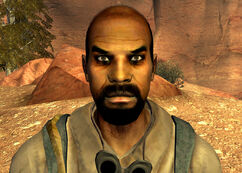 “Howdy, friend. Heard my little broadcast, did you? Yeah, you look the type.”

Jed Masterson is a traveling merchant who works for the Happy Trails Caravan Company in 2281.

Masterson was a caravaneer who headed a Happy Trails caravan run into Zion Canyon, looking to delay Happy Trail's demise by trading with the Mormons in New Canaan, who had always been reliable for trade.[1][2] This caravan run was important for the fate of Happy Trail's continued existence, so Masterson was understandably cautious when it came to anything that could slow the caravan down.[3][4]

He had never been to Zion before and needed someone with a Pip-Boy 3000 in order to map out the area and its natural hazards.[5] He used to have another prospector with a Pip-Boy on prior caravan runs, but he left without a reason shortly before the expedition into Zion; Jed presumed that something must have spooked him.[6] To this end, he was looking for any wastelander with a Pip-Boy to replace that prospector; he offered 25 caps per day and a bonus upon reaching Zion and New Canaan.[7] The Courier was able to fill this role, but was unable to protect Masterson and the other caravaneers from their untimely deaths when the caravan was ambushed by White Legs when they arrived in Zion.

Jed appears to have a close relationship with Stella. When she is shot, Jed reacts in a more dramatic sense than he does with the others.[8] When the Courier threatens Ricky and makes him leave, Jed seems glad to hear the news.[6]

His corpse may never disappear. [verified]

Retrieved from "https://fallout.fandom.com/wiki/Jed_Masterson?oldid=3295930"
Community content is available under CC-BY-SA unless otherwise noted.
... more about "Jed Masterson"
RDF feed
Has platform
PC +  and Xbox 360 +