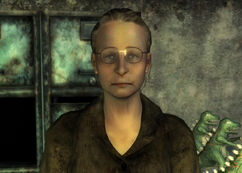 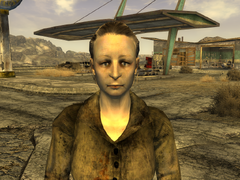 Jeannie without her glasses

“Well, saints alive. That is a load off. Nothing to be done, though. Those ghouls just didn't know when they weren't wanted. Couldn't take a hint. And aren't you just the most unexpected gift our little town ever had? Here, take this. And go buy yourself something nice.”

Jeannie May Crawford is the owner-operator of the Dino Dee-lite Motel and the unofficial leader of Novac in 2281.

Jeannie is a proud resident and businesswoman in the frontier town.[1] Tough, fair and proud of the hard work poured into the town of Novac by its inhabitants, she appears to drive an honest bargain, a rare thing in the wastes. Minor cracks appear in the image when someone criticizes Novac and she immediately jumps to its defense, citing the hard, honest work people do on the frontier.[2][3] The cracks grow when the subject of Jason Bright's ghouls is brought up, when she rather bluntly states that she would not miss them if they all were slaughtered,[4] considering them little more than parasites looking for handouts.[5][6] The prejudice is only deepened by her awareness that Novac exists by the salvage of the REPCONN test site and any ghouls standing in the way threaten the basis of the town's economy.[7]

Jeannie May also has no compunctions about betraying passing "city folk"[8] or people who settled in Novac, even if their only crime is failing to appreciate her quaint little town.[9] Carla Boone's apparent ingratitude grated on Jeannie May, who decided the best way to get rid of the problem was by selling her out to the slavers of the Legion, clearing a path to the Boone apartment so that they could abduct her with ease. To cover it up, she started lying that Carla just up and left town;[10] painting Craig as maddened with grief and inventing the whole kidnapping to cope - all the while keeping her bill of sale in the motel's safe, waiting to collect the 500 pieces of silver on top of the 1,500 she received for selling Carla out.[11]

One for My Baby: It is revealed that Jeannie May sold Boone's wife Carla and her unborn child into slavery to Caesar's Legion. After the player character leads her to her death at the hands of Boone, it is possible to loot her body for a key and use it to unlock a safe in the room at the entrance. Unlocking said safe will make the player character able to get a note (bill of sale), incriminating Jeannie May of selling Carla into slavery.

Jeannie May Crawford appears only in Fallout: New Vegas.

Retrieved from "https://fallout.fandom.com/wiki/Jeannie_May_Crawford?oldid=3454780"
Community content is available under CC-BY-SA unless otherwise noted.
... more about "Jeannie May Crawford"
RDF feed
Has platform
PC +, Playstation 3 +  and Xbox 360 +