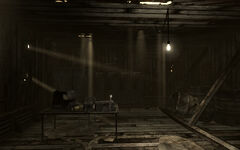 Jean Sky Diving is a location in the ruins of Jean, in the Mojave Wasteland in 2281. It is located north of Powder Ganger camp west and northeast of Goodsprings source.

The building and surrounding area are all that remain of the pre-War skydiving school, now occupied by a few Powder Gangers. A small plane still sits behind the main building, slowly rusting into the ground.[1]

The location consists of a small shack, sitting at the intersection of Nevada State Route 160 and Interstate 15. A pickup truck is parked to the right of the front door, with a briefcase in the bed. Just behind the shack is an airplane, down a set of stairs. A crate of explosives can be found nearby. The interior is simple, equating to a small room with a desk and some lockers.

Jean Sky Diving is based on the real world location of Jean Sport Aviation Center, a small airport utilized for recreational aviation such as gliding and skydiving in Jean, Nevada. The airport is located at the same highway interchange, with the exception of Interstate 15 meeting Nevada State Route 161 instead of Nevada State Route 160.

Plane on the runway