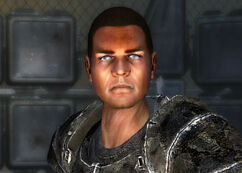 “One day Mama took me aside and said, "Boy, you're never going to go very far, but you're gonna make a whole lot of people come up short."”

Jean-Baptiste Cutting is the head of security for the Mojave Wasteland branch of the Van Graffs weapons empire and Gloria Van Graff's right-hand man, living at the Silver Rush weapon shop in Freeside in 2281.

Around 2281, Cutting has taken on the role of an enforcer, becoming the backbone of the Van Graff family security forces. He works in the Silver Rush alongside his half-sister, Gloria, who he refers to as "Glory" and does his part in the politics of their operations in the only way he knows how; with the barrel of his laser rifle. He has Cutting as a surname, as opposed to Van Graff because his mother liked his father so much that she wanted Jean-Baptiste to have his father's last name.[1]

He is mentioned in design documents for Van Buren, the canceled Fallout 3 by Black Isle Studios.