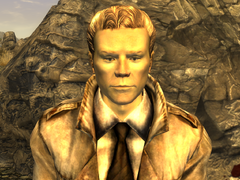 Jay spawned alive, without his hat

Jay Barnes is a deceased investigator found in one of the Ultra-Luxe hotel rooms in 2281.

Hired by an unnamed groom to investigate the disappearance of his bride at the Ultra-Luxe,[1] private detective Jay Barnes was rented a room by the White Glove Society member Mortimer, for the duration of the case. He was planning to meet up with his contact, a White Glove insider with knowledge of the scheming front desk manager's plans behind closed doors: the eventual return of the White Gloves to their old cannibalistic ways. However, Barnes failed to show for the meeting that was supposed to take place in the bathhouse steam room at 4 in the afternoon, unaware that Mortimer has an assassin working for him under orders to stop anyone attempting to shut him down. He perished in his hotel room, the scene of a brutal attack.