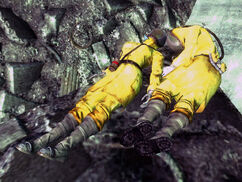 Jason's corpse (on the right) 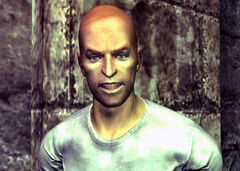 “Jason's beginning to get concerned, but I believe we're close to learning what we came here for. The poor man's been through Hell for me.”— Isabella Proud

Jason is the colleague of Isabella Proud, the scientist researching ghouls in 2277. His corpse is found near the Takoma Park factory, next to hers.

Jason and Isabella Proud were scientists conducting research on ghouls. They had a camp near the factory in Takoma Park, with a terminal describing their work. Their corpses are nearby, at the edge of the radioactive pool. Evidence based on Isabella's logs seems to indicate that she was studying the difference between normal ghouls and their savage, feral counterparts. The text of her entries implies that she saw feral ghouls to be non-sentient, but potentially approachable humanoids. Thus, she engaged in a series of actions that eventually doomed both herself and her husband Jason, despite the best of intentions and friendly gestures on her part.

When resurrected, Jason turns hostile towards the Lone Wanderer, while Isabella remains friendly.

Jason Proud appears only in Fallout 3.

The bodies of Jason and his wife do not always appear. [verified]

The camp and the corpses
Add an image to this gallery
Retrieved from "https://fallout.fandom.com/wiki/Jason_Proud?oldid=3125167"
Community content is available under CC-BY-SA unless otherwise noted.