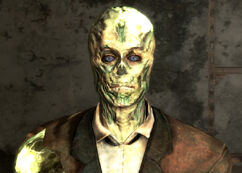 Come Fly With Me
I Could Make You Care

“I am Jason Bright, the prophet of the Great Journey. All the ghouls you see here are members of my flock.”

Jason Bright is the glowing one leader of the Bright Brotherhood ghouls at the REPCONN test site in 2281.

A sentient glowing one ghoul, Jason leads a band of religious Brotherhood ghouls that want a better life away from the wasteland and bigoted humans. He hopes to use the rockets at REPCONN to fly on a Great Journey to a "sacred place" named the "Far Beyond" by the Bright Brotherhood, where they will live in peace. That is until they are attacked by invisible "demons." The "demons" (nightkin) attacked the Brotherhood without warning and killed many of them. They were forced to move to the upper levels of the REPCONN test site.

After this, Jason tells the Courier that the "demons" shouted threats at the ghouls and said that they'd kill any ghoul that came down to the basement, but if they stayed where they were, the "demons" said that they would let them live in peace. When asked about it, he will imply that the Courier was sent by the Bright Brotherhood deity to help them, and then he asks them to rid the "demons" from the basement of the REPCONN test site. If the Courier accepts, this will start the Come Fly With Me quest. If he dies, the player character will fail the quest.

Jason Bright appears only in Fallout: New Vegas, and is mentioned indirectly by the Courier's brain in Old World Blues. 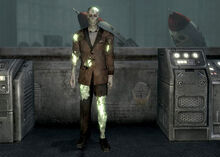 Jason Bright near the rocket launching pad
Add an image to this gallery
Retrieved from "https://fallout.fandom.com/wiki/Jason_Bright?oldid=3156931"
Community content is available under CC-BY-SA unless otherwise noted.