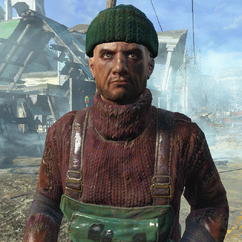 “Avery and the others were just doing their jobs, but you... you ain't one of us. We owe you. And Harbormen pay their debts. Here.”

Jared Gresham is a resident of Far Harbor in 2287.

If he survives the gulpers' attack, he will give the Sole Survivor 140 caps and answer one, only one, question. After some time he will disappear from Far Harbor. If the player character answers "thanks," he tells the Sole Survivor that he is going to the mainland due to the frustration of trying to survive on the island.[1]

Jared Gresham appears only in the Fallout 4 add-on Far Harbor.

Gresham is a tribute to a Fallout fan by the same name from Alabama, who died in a car crash before Fallout 4's release. One of the real-life Jared's friends, Jon Carvalho, attempted to contact Emil Pagliarulo via Twitter. Although Pagliarulo typically does not respond to such messages, he was moved when Carvalho told him Gresham's story. Although they originally planned to simply put his name in a terminal entry as a quiet reference, the lead designer of Far Harbor mentioned that some new human NPCs needed to be named, and the team realized they could memorialize Gresham that way.[2]

Retrieved from "https://fallout.fandom.com/wiki/Jared_Gresham?oldid=3275007"
Community content is available under CC-BY-SA unless otherwise noted.