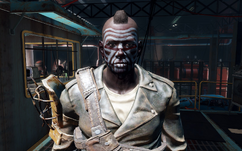 Jared is the leader of the raider gang operating in Lexington in 2287.

As a child, he spent time with Mama Murphy who correctly predicted Jared's later abduction by raiders and that he was "gonna be a monster." After taking over the Corvega assembly plant, he spent much of his time attempting to duplicate Murphy's ability, to no avail. He even began recruiting new members by enticing them with free chems, in order to experiment on them. When Gristle informed him of an elderly woman traveling with a caravan, Jared sent his lieutenant after them, certain that she was the fortune teller. This woman was indeed Mama Murphy, who was traveling with Preston Garvey and the other Quincy survivors, searching for a spot to start rebuilding their lives.

Jared appears only in Fallout 4.

Retrieved from "https://fallout.fandom.com/wiki/Jared?oldid=3246272"
Community content is available under CC-BY-SA unless otherwise noted.