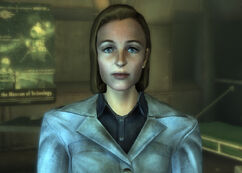 “It was either this or wind up dead in a ditch someplace, y'know?”

Janice Kaplinski is the chief botanist working alongside Doctor Li and Anna Holt in the Rivet City science lab in 2277.

Janice was born in 2248. The only thing 29-year-old Janice loves more than her hydroponic plants is Doctor Li. It's a case of classic hero worship. Janice is utterly loyal to her and completely believes in the projects they are working on. She is a very accomplished scientist but lacks that vital spark of genius and ambition that James and Doctor Li have, but she is their equal in technical knowledge. She is close friends with Dr. Preston, who treats her like the daughter he never had.[1]. As a botanist, she puts her skills to work to help find ways of creating non-irradiated food sources by conducting experiments in hydroponics.

In 2277, she assists Madison Li with her work at Project Purity, but when the Enclave takes over the facility she is killed by Colonel Autumn.

Janice is part of a team of scientists in the Rivet City science lab.

Janice conducts hydroponics experiments with the help of Doctor Li and Anna Holt.

At 7:00 AM she leaves the lab for the Weatherly Hotel to eat for around two hours before returning to the lab.

After the Lone Wanderer enters the Jefferson Memorial rotunda during Colonel Autumn's confrontation with James, she is shot and killed as a means of coercion to hand over Project Purity to the Enclave.

Janice can be found eating the test food if the player character manually waits instead of using the wait function.

Janice Kaplinski appears only in Fallout 3.

Retrieved from "https://fallout.fandom.com/wiki/Janice_Kaplinski?oldid=3200796"
Community content is available under CC-BY-SA unless otherwise noted.