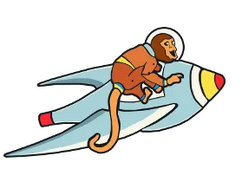 Jangles the Moon Monkey was a character in the pre-War TV show The Adventures of Captain Cosmos.

Jangles the Moon Monkey is Captain Cosmos' trusty sidekick. They travel through space together in The Adventures of Captain Cosmos.

Jangles the Moon Monkey was played by Jangles, the monkey, in October of 2077.

The inclusion of the monkey, while a reference to the wacky plotlines of 1950s TV, is most likely a homage to the first monkeys in space (Albert and Albert II). It may also be a nod to Blip the Space Monkey from the 1960s cartoon Space Ghost.

Jangles concept art in The Art of Fallout 4

Jangles seems nervous about flying in the Skylanes Flight 1981

Jangles and friends "storytime" in the Harbormaster hotel

Atomic Shop icon
Add an image to this gallery
Retrieved from "https://fallout.fandom.com/wiki/Jangles_the_Moon_Monkey_(character)?oldid=3267043"
Community content is available under CC-BY-SA unless otherwise noted.