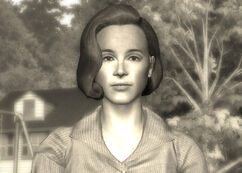 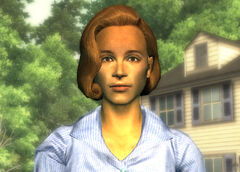 “You fucking coward. I can't stand the sight of you. Get away from me!”

Janet Rockwell is the allegedly happy wife of the seemingly happy Roger Rockwell, living in Tranquility Lane in 2277.

Janet's days consist of baking cookies and a variety of pies, going to the salon and a little light gardening, before she retires to the kitchen to pace with her rolling pin, thinking up ways to kill her neighbor Martha. That hussy is having an affair with her dear Roger; she's sure of it.[1]

Janet Rockwell appears only in Fallout 3.

Retrieved from "https://fallout.fandom.com/wiki/Janet_Rockwell?oldid=3245844"
Community content is available under CC-BY-SA unless otherwise noted.