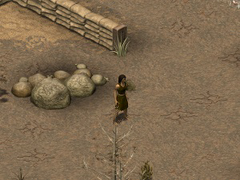 Janet Badall is a character in the Midwest in 2197. She is a part of the special encounter called "Deathclaw Liberation" that the Warrior may come across in their travels.

Janet is an animal liberationist.

Janet enthusiastically assumes the Warrior is, like she, an animal liberationist and releases the caged deathclaws, with a fatal result for herself.

Her encounter is a reference to the famous primatologist, Jane Goodall.

Retrieved from "https://fallout.fandom.com/wiki/Janet_Badall?oldid=3298132"
Community content is available under CC-BY-SA unless otherwise noted.