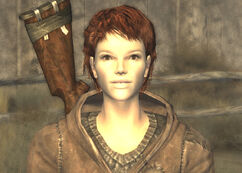 “Well, you don't have to do that anymore! Sounds like I better hurry to him. Any chance the Boomers would let me visit Nellis?”— To a female Courier

Janet is a caravaneer working for the Crimson Caravan in 2281.

Janet is a redhead working at the Crimson Caravan Company in the Brahmin pens. During the day she can be found tending to the brahmin herd and cleaning up their droppings, and at night sleeping in the barracks. During breaks, she stares at Nellis Air Force Base through binoculars and watches a young man who stares at her as well.

After completing Cass' quest Heartache by the Number with the violent solution (unless you Sneak kill Alice) or if the Courier's reputation with the NCR is at Vilified, Crimson Caravaneers become hostile and Janet is included in this. To bypass, use NCR affiliated armor and they should ignore you enough to complete the quest. [verified]

Retrieved from "https://fallout.fandom.com/wiki/Janet_(Fallout:_New_Vegas)?oldid=3240251"
Community content is available under CC-BY-SA unless otherwise noted.