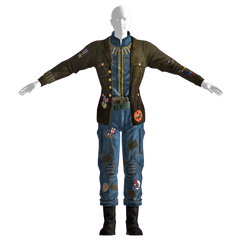 Janet's Boomer outfit is a piece of clothing in Fallout: New Vegas.

It is identical in appearance to the Boomer jumpsuit and gives a bonus of 5 to Repair. It can be repaired with other Boomer jumpsuits, or any clothing with the Jury Rigging perk.

The clothing is worn by four welder Boomers in one of the Nellis hangars. Can't be obtained in-game.