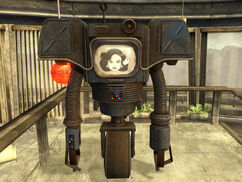 Keeper of the snow globe collection
2 of Diamonds (with Marilyn)

“Why I'm a RobCo PDQ-88b {Mark} Mk I Securitron, you silly goose! We're the finest in personal or civil robotic security on the market!”

Jane's neuro-computational matrix is a copy of a woman that Mr. House had known as "one of Mr. House's girls." Jane makes sure to keep Mr. House "entertained," even after giving up his physical needs.

Jane is a reference to the 1950s film star Jane Russell, who began her film career in a movie with Howard Hughes, the man upon who Robert House is based. In real life, Jane Russell was friends with Marilyn Monroe. A securitron Marilyn was intended to appear in the game, as seen in the concept art and the Collector's Edition playing cards, but was cut from the final release. 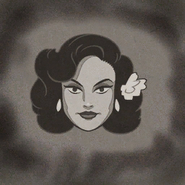 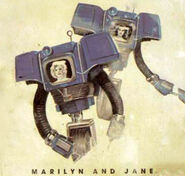 Marilyn and Jane portrayed on the official card deck
Add an image to this gallery
Retrieved from "https://fallout.fandom.com/wiki/Jane_(Lucky_38)?oldid=3349994"
Community content is available under CC-BY-SA unless otherwise noted.