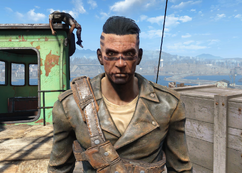 James Wire (simply referred to as Wire in-game) is a raider living in the Commonwealth in 2287.

Wire is a former Minuteman-turned-raider. After the death of General Becker in 2282, he and his men took up residence at Libertalia, a collection of ships and shipwrecks off the coast of Boston.

Initially, he tried to enforce the Minutemen way of helping other settlers in exchange for caps and food, but after a while, their food supplies reached dangerous lows. This resulted in two of Wire's best men, Williams and Anderson, raiding caravans. After Wire discovered the actions of his men, he had them executed to show that he would not tolerate raider behavior.

Eventually, Wire himself gave in to the raider lifestyle after caravans were repeatedly stiffing his men on their escort jobs. After this, Wire begrudgingly accepted that he must do what it takes for him and his men to survive, including collecting tribute from Eager Ernie and the Triggermen at Easy City Downs for continued use of the racetrack.[1] Wire notes in his last terminal entry that his former Minuteman leaders would be sickened by his actions and that he no longer feels like making entries.

Before the Synth Retention quest is started, the Sole Survivor can find Wire atop the largest and final shipwreck structure at Libertalia. After the start of Synth Retention, a synth named Gabriel replaces Wire as the leader of the Libertalia raiders.

James Wire appears only in Fallout 4.

Retrieved from "https://fallout.fandom.com/wiki/James_Wire?oldid=3176855"
Community content is available under CC-BY-SA unless otherwise noted.