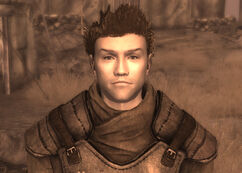 An Ear to the Ground
Medical Mystery

“I've been placed in charge of morale. It's difficult trying to keep spirits up with the Legion nearby.”

Private James Sexton is one of NCR's frontline troopers stationed at Camp Forlorn Hope living in the Mojave Wasteland in 2281.

An Ear to the Ground: If the player character tells him his morale boosting is a good idea then he will inform them of his game involving cutting ears off of Legion soldiers. The player character can bring Private Sexton Legion ears after this, however, they can obtain these ears prior to receiving the offer.

Retrieved from "https://fallout.fandom.com/wiki/James_Sexton?oldid=3237396"
Community content is available under CC-BY-SA unless otherwise noted.