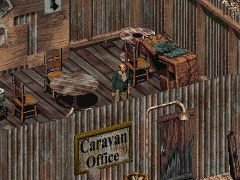 A burly, thick-set man with short, bushy hair, covered in scars and with a calculating stare, James "Jimmy" Hoffy is the caravan master for the city of Redding. He is a direct, down to earth sort of man, with a no-nonsense mentality, who would prefer his city staying independent from the three powers of the wasteland - he sees NCR as self-righteous SOBs, New Reno as anarchy bogged down in familial business and Vault City as a bunch of uppity, elitist bastards.

Regardless, he makes business with the caravans, processing goods that come and go - brahmin from the NCR, Jet from New Reno and medicine from Vault City.

James Hoffy appears only in Fallout 2.

Retrieved from "https://fallout.fandom.com/wiki/James_Hoffy?oldid=3343560"
Community content is available under CC-BY-SA unless otherwise noted.