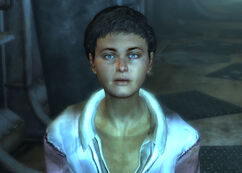 James Hargrave is a young inhabitant of Rivet City in the year 2277.

James Hargrave is one of Rivet City's few kids. He doesn't spend any more time in the cramped quarters than he has to and can usually be found in the company of his friend C.J. Young. The two of them like to play in the storage rooms or hang around on the flight deck. James is alternately sullen and wild. He will do just about anything on a dare. He is capable of holding a grudge for months. He is loyal to C.J. but picks on her mercilessly. The two don't have many other options for playmates, so C.J. tolerates the abuse. On the rare occasions when C.J. stands up for herself, James is devastated and will do anything to earn her forgiveness.[1]

James has a reputation for being an abused child and a surly troublemaker among the citizens of Rivet City. His alcoholic mother, Tammy Hargrave, presumes that his father is dead. She tells the player character that James's dad simply left the city one day and never returned. She blames James for his father abandoning them.

James is the son of Tammy Hargrave. He also appears to be friends with C.J. Young, as they are often seen playing together.

James Hargrave appears only in Fallout 3.

During some dialogue in the quest Our Little Secret, it may be implied that the residents of Andale killed a man that might have been his father. In dialogue, they'll mention having killed a man who begged for his life saying he had a son in Rivet City.

James runs away but can never be found; this is often accompanied by him also leaving C.J. behind, who continues running around Rivet City but with the player unable to interact with her in any way.[verified]

James and C.J. running off

Retrieved from "https://fallout.fandom.com/wiki/James_Hargrave?oldid=3245843"
Community content is available under CC-BY-SA unless otherwise noted.