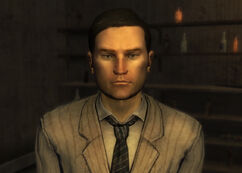 Casino owner
2 of Spades (with Francine)

“Our wealthiest client has a thing for ghouls, and a thing for cowboys. He wants an escort who can satisfy both fetishes.”

James Garret is the co-owner of the Atomic Wrangler casino, along with his twin sister Francine Garret. He lives in Freeside in 2281.

James is looking for prostitutes for his escort service. Speaking to him can begin the quest Wang Dang Atomic Tango which, despite the dubious connotations, does not give any negative Karma.

Though he denies it, James is also an alleged closet robot fetishist. With a Speech of 40, talking to James about Fisto after the quest, Wang Dang Atomic Tango will result in some humorous dialogue.

The player character can pay James to improve their reputation in Freeside. Both options can be used three times, each rewarding a different amount of rep for a varying amount of caps.

The Garrets, as depicted on their Collector's Edition playing card.
Add a photo to this gallery
Retrieved from "https://fallout.fandom.com/wiki/James_Garret?oldid=3123156"
Community content is available under CC-BY-SA unless otherwise noted.