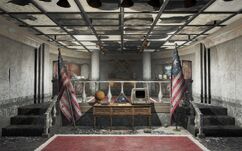 The basement used to be a janitor's area but it was changed into a pre-War cache, two months before the Great War. There are two ways to approach said cache. The left one is simple and requires one to walk through a gas-filled corridor after picking a Master-locked door. The right one is the original entrance covered by dozens of laser tripwires linked to turrets.

Directly after the door behind the laser tripwires will be a room with another door with two Protectrons at each side of it. In front of them, all will be the treasures access terminal, which opens the door, leading to the Treasures exhibit. To the left is a hole in the wall leading to a storage area and the Master-locked door.

Behind the treasures access door will be yet another door with a button on a stand in front of it, which opens it, revealing the Treasures exhibit, a small room filled with numerous broken display cases, and a raised second half that loops around the middle table and rail.

The displays in the treasure room (from left to right on entering) are as follows:

The central tables on both the upper and lower section of the room are not specifically titled displays. If all of the laser trip wires defending the Treasures exhibit are disarmed manually the following can be obtained:

The laser tripwires can be re-armed after being disarmed, allowing them to be looted again.

The Jamaica Plain Town Hall basement only appears in Fallout 4.

The Treasures of Jamaica Plain, Treasures inventory and the holotape instructions note

Treasury
Add a photo to this gallery

Retrieved from "https://fallout.fandom.com/wiki/Jamaica_Plain_Town_Hall_basement?oldid=3461613"
Community content is available under CC-BY-SA unless otherwise noted.