Jamaica Plain is a neighborhood of Boston and a possible settlement in the Commonwealth in 2287.

In 2077, with the city finances at a deficit,[1] Jamaica Plain sought a way to close the huge gap in their budget without cutting the massive pay and benefits to their work staff. They decided to create an attraction to boost the local economy, called the Treasures of Jamaica Plain, a time capsule to be opened two hundred years later.[2] However, they also had another fiscal problem, as they had to appropriate funds to maintain the town hall. Instead of looking for more cuts to make, Mayor Alyssa Park decided to kill two birds with one stone and sent the funds to repair the basement,[3] although not the roof or plumbing.[4] In time, the exhibit became her pet project.

The project consumed a massive amount of funding, pushing the budget into the red. They began construction by removing the storage room and laying marble floors, and later added an automated security system, a Type-V Laser Defense Grid, to guard the treasure.[5] Once completed, the treasure rooms took up most of the basement.[4] Apart from the Revolutionary era antiques, it contained battlefield mementos (as a memorial to Private McKinney), a journalist's life work (also a memorial, for M. Stahlman, a reporter of the Canadian Annexation) and donated baubles from local residents, businesses and facilities.[6] In the end, the exhibit was a disaster and very few visited.[7] On October 23, 2077, with the Great War occurring outside, the janitor made one final entry and locked down the exhibit.[8]

By the 23rd century, Jamaica Plain had become infamous for both the feral ghoul infestation and the fabled treasures that lie somewhere inside the town. In fact, an expedition of treasure hunters (Sal, Carl Everett, Luke Silverhand, Ken Standish, Tanya Standish) entered the suburb looking for it, although the ghouls kept them at bay.[Non-canon 1]

Sal, an ex-Gunner and bounty hunter, tracked down Carl Everett and gave him an ultimatum, or else he would be turned in for a reward. Desperate, he came up with an idea,[9] and on September 1, 2287, he pitched a plan to find the treasures of Jamaica Plain to Sal and she accepted.[10]

After successfully convincing her that he could pull together a team, he called in favors and enticed several acquaintances to the team[11] with the promise of an even split in the loot.[12] All the while, Carl hoped that Sal and the others would not catch on to his eventual betrayal and abandonment. By September 22, the month-long preparations were in order, learning of the nearly unheard of security and the complete lack of description on what it was guarding.[10] However, unbeknownst to Carl, virtually every other member of the team was planning to betray and murder at least one other person on the team.

First was Luke Silverhand, who, after digging up the details of the security systems put in place, planned to let them get into the range of the defense grid and then activate it, killing them all.[13] By October 5, they all had gathered near the town, except for Hadrian (who would have been their sniper), who died after receiving the invitation.[14]

Despite his reservations, Carl accompanied the team into Jamaica Plain, knowing full well that once they unlocked the treasure, Sal would just kill the team and keep the loot for herself.[15] On October 6, they entered the town;[16] by this time, however, no one was willing to fight together. At the first sight of a feral, they split, each trying to stand their own against the hordes.[17]

Sal, determined to get the treasure even if she had to dig with her bare hands, made it to the second floor of the town hall before being cornered in the remains of an office and was killed. Later, the Sole Survivor can explore the ruins. If the ferals were wiped out from this town, the location could prove to be a valuable asset to the Commonwealth Minutemen.

Jamaica Plain is located directly southwest of University Point and northwest of Quincy, mostly surrounded by walls with a variety of partially intact buildings within. The town has a contingent of feral ghouls within the boundaries.

One of the more notable buildings, an old church that has its doors chained, is found in the southern central portion of the area. It is accessible by entering the house next to it and climbing on the roof, or by going through the windows of the church, which are large enough to jump through without difficulty.

The most sought after place in Jamaica Plain is the town hall, found across from the church. The town hall's basement is the home of the Jamaica Plain treasures exhibit, which has lured treasure hunters in hopes of finding what lies within. The basement used to be a janitor's area but it was changed into a pre-War cache, two months before the Great War. The exhibit itself features many unique pre-War items deemed as treasures by its former inhabitants.

Of these treasure hunters, one group, in particular, can be found dead and scattered throughout the town, including:

Although the construction area is not as large as the entire suburb, it is still of moderate size, surrounding the main house and extending out to the adjacent parking lot and a portion of a nearby street. The area of Jamaica Plain that can be used to build is only a small portion of the overall ruined town. However, it's a rare settlement that is an actual town with architecture.

Salvage in Jamaica Plain is rather sparse compared to other sites, but its location as one of the few southeastern settlements makes it a good location for a Minutemen artillery piece. The zone contains several junked cars that can be scrapped for steel but contains nearly no wood.

There are no bodies of water, so simple water pumps must suffice. There are many line-of-sight breaks and natural walls, which combined with the smaller area, should prove easily defensible with turrets. The eastern parking lot has plenty of arable land for crops and water wells, and the house is mostly intact, able to be built upon if so desired. The entire area is situated in a dangerous part of the Commonwealth.

Jamaica Plain appears only in Fallout 4.

Jamaica Plain is based on the real-world location of Jamaica Plain, a neighborhood on the southern side of Boston, Massachusetts. 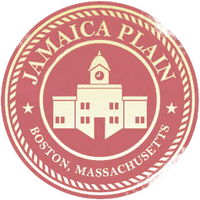