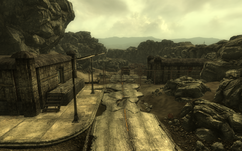 Jalbert Brothers waste disposal is a radioactive waste disposal site northwest of Megaton and Vault 101. Its closest neighbors are Fort Bannister to the south, Everglow National Campground and Rockbreaker's Last Gas to the northwest, VAPL-58 power station to the east and just north of the entrance is the wasteland gypsy village.

The waste disposal facility is an open-air dump filled with many barrels of radioactive waste. High-level players will almost always find a lone deathclaw within the perimeter of the fence near the offices, making it difficult to gain entrance to them.

There are two offices connected via an underground tunnel occupied by radroaches. Inside the north office there is also a workbench along with all the ingredients for a Nuka-grenade.

There is a trigger for a "Type A" random encounter just outside the office door on the right. 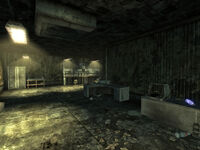 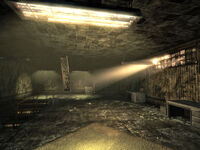 D.C. Journal of Internal Medicine
Add an image to this gallery
Retrieved from "https://fallout.fandom.com/wiki/Jalbert_Brothers_waste_disposal?oldid=3149337"
Community content is available under CC-BY-SA unless otherwise noted.