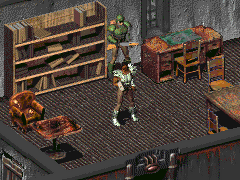 “Where were you when I was selling some depleted uranium rounds a few years back?”

Jake is a resident of Old Town around 2161. He is the finest weapons dealer in the Hub.

He used to be a member of the Union of Atomic Workers years before his arrival in the Hub, but he left to see the world. He established his shop in the Hub, where he is generally tolerated despite the police not liking his business. He sells only high-quality, high-end weapons to the discerning customer, and he fine-tunes owned weapons together with his associates before selling them.

He has one of the widest weapon and armor selections in Fallout, second only to the Gun Runners.

In some versions of Fallout he is called Jacob, instead of Jake.

Jake appears only in Fallout and is mentioned in the Fallout Bible 8.

Dogmeat was originally supposed to be Jake's dog.[1]

Retrieved from "https://fallout.fandom.com/wiki/Jake_(Hub)?oldid=3359146"
Community content is available under CC-BY-SA unless otherwise noted.