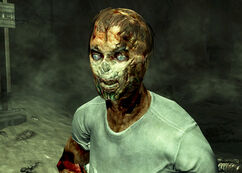 “These guys aren't who I thought they were. Jesus, they killed that family for a sack of rotten vegetables. Getting out of here next chance I can without catching a bullet.”— Personal journal #3

Jaime Dexter Palabras[1] is a crazed ghoul in the virulent underchambers of the Dunwich Building and can be found worshiping a strange obelisk alongside a group of several feral ghouls in 2277.

Jaime was born in the mid-wastelands to a ranger. His father returned to camp from an expedition with a thick book, bound in odd black leather and stamped with strange glyphs. Convinced the book would fetch a high price, his father traveled to the Capital Wastes to unsuccessfully offer it to the Brotherhood of Steel scribes. Despondent, Jaime's father vowed to return the book "to its source."[1]

Parts of Jaime's personal journal can be found as audiologs spread throughout the building. The transcripts reveal that he was a traveler in his late twenties who set out searching for his father after he left him alone in a hospital and "went crazy" after acquiring a mysterious book (the Krivbeknih). Jaime tracked his father south from an unknown location across vast distances.[2]

He eventually fell in with another group of travelers who, as it turns out, were violent raiders. It was not long until they killed a family for a "sack of rotten vegetables." Jaime secretly resolved to get away from this dangerous group as soon as possible.

The opportunity to escape presented itself when the raiders prepared to attack a group of traders. Jaime turned on the raiders, earning the thanks of the traders. Grateful, the trader group told him where his father was headed. Following his father's trail, Jaime headed to the Dunwich Building. He eventually found his father who had, by that time, become a ghoul. In his audiologs, he recalls hearing the raiders tell "spook stories" about "zombies" inside, which were apparently true.

Afterward, Jaime picked up a strange book his father had been keeping and decided to rest against an unusual obelisk at the bottom of the building. Upon awakening, he had begun the process of mutating into a ghoul due to the radiation emitted from the obelisk (one can hear Jaime mutating at the end of Jaime's personal journal entry 08 and throughout entry 09).

Jaime Palabras appears only in Fallout 3.

Retrieved from "https://fallout.fandom.com/wiki/Jaime_Palabras?oldid=3186381"
Community content is available under CC-BY-SA unless otherwise noted.