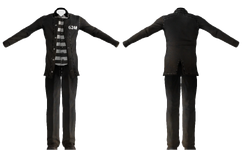 The Jailhouse Rocker is a piece of armor in Fallout: New Vegas. It is worn by the Kings gang members.

This is meant to be a replica of the clothing worn in Elvis Presley's 1957 video "Jailhouse Rock." The clothing bears the number 6240 on the left chest, which is the same number worn by Elvis in the video.