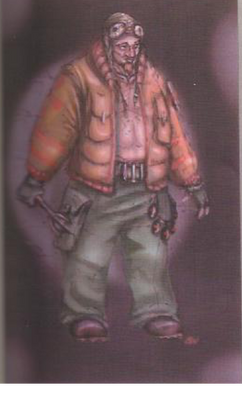 Jaffe was planned to be one of the four playable characters in the canceled Fallout: Brotherhood of Steel 2.

Jaffe is described as a short, yet thick man about five feet, six inches tall. He has a small neck and wears a beatnik goatee perched on the top of his chin.

Like Lilith, Jaffe grew up in the Brotherhood of Steel, and from an early age, he was fascinated by fire. He also had a fascination with taking things apart and putting them back together again. As time went on, he was sent to the demolitions department of the BoS for R&D, but as the tension between the NCR and the Brotherhood mounted, they pulled him for active duty.[1]

Jaffe can use all weapons except Dual Weapons. He starts with an advantage to all explosive weapons. He can also get the ability to set traps.[1]

Jaffe's Uber Weapon is the "Fat Boy" Portable Nuclear Bomb.[2] With Fixer, Jaffe does not have to pay an NPC to repair his Uber Weapon, instead being able to repair it himself.[3]

Jaffe is the only player character able to understand the heavily cloaked Cipher in Lone Star, which opens up side quests that would otherwise be unavailable.[4]

Jaffe was going to appear in Fallout: Brotherhood of Steel 2.

Retrieved from "https://fallout.fandom.com/wiki/Jaffe?oldid=3326710"
Community content is available under CC-BY-SA unless otherwise noted.