Despite his strict nature and commitment to the 200-year isolation experiment for the Societal Preservation Program,[1][Non-canon 2][Non-canon 3] the overseer of Vault 13 is genuinely fond of his community.[Non-canon 4][2]

Many years prior to 2161,[3] the controller chip for Vault 13's water purification system began to show signs of deterioration[4] and had an insufficient supply of replacement water chips due to a shipping error.[5] This component, vital for the control vault's inhabitants to survive, was unable to maintained any longer with work-arounds being impossible due to its complexity and could not be fabricated due to a lack of necessary parts.[6][7]

The overseer sought members of the community to journey into the wasteland in an attempt to find a replacement or solution.[4][7] Previous excursions had been unsuccessful, such as the attempts of both Talius and Ed.[3][7][Non-canon 5] This led to the selection of an individual that became known as the Vault Dweller to serve as the next water chip scout on December 10, 2161.[4][8]

Following the successful retrieval of a replacement water chip from Vault 12, the Vault Dweller returned and was immediately asked to file a report on what they saw and experienced in the outside world.[9] Upon reading the Vault Dweller's submission, the overseer shared his concern with the existence of creatures known as super mutants appearing at an alarming rate.[10] Considering these mutants a potential threat to the vault, the overseer tasked them with a second mission which involved locating and destroying the source of the super mutants.[10]

The Vault Dweller returned once more to Vault 13 after successfully completing the second mission, finding the source of the mutants, killing their leader the Master, and destroying the vats used to create new super mutants at the Mariposa Military Base.[11] The overseer greeted them at the door, and informed them of his decision not to allow them to return.[12] The overseer cited worries surrounding their influence on the other inhabitants, as inspiring others to leave may render the vault inoperable.[12]

The exile of the Vault Dweller did not prevent other inhabitants from discovering their fate and choosing to follow them into the wasteland.[13] The remaining members of Vault 13's community put the overseer on trial for this decision, ultimately sentencing him to death and retiring the title of overseer for their community's leader.[13]

* In the overseer chair.

"You're back! And in one piece! How goes the search?"

"Do your best. Remember, we're all counting on you."

"We've debated this before. You ought to know now, after being out there! You think the rest of us could survive that? Besides, I'd be out of a job! I'm management! It's not like I know how to do anything useful!"

"Nothing? No, oh no! It was something. Don't downplay what you've done. You've saved a lot of lives. All right, now we need a report on what's out there. Please go to the library."

"They'll want to leave. What happens to the Vault if we lose the best of a generation? What if we are the only safe place in the world? You just gave us back all these lives... I can't take the chance of losing them."

"I've made a lot of tough decisions since I took this position. But none of them harder than this one. You saved us, but you'll kill us. I'm sorry. You're a hero... and you have to leave."

“You've done it! It's... wonderful. Amazing! I'm so proud of what you've accomplished, what you've endured. There's no way the people of the Vault can ever thank you enough for what you've done. You've saved all our lives. Who knows, maybe even saved the human race. [The Overseer sighs.] That makes the rest of this even harder. Everyone will want to talk to you. Every youngster will look up to you, and want to emulate you. And then what? They'll want to leave. What happens to the Vault if we lose the best of a generation? What if we are the only safe place in the world? You just gave us back all these lives... I can't take the chance of losing them. I've made a lot of tough decisions since I took this position. But none of them harder than this one. You saved us, but you'll kill us. I'm sorry. You're a hero... and you have to leave.”

The overseer appears only in Fallout, as a talking head.

He was also to appear in the canceled Fallout movie, where he was to be revealed as the founder of Vault-Tec and the man who started the Great War.

“I always thought of Fallout's story of drawing straws was something the Overseer thought of. "Look, someone has to go outside, and they may die out there, so let's draw straws". Someone, probably not the Overseer since he wouldn't have gone outside no matter what, demanded that EVERYONE draw a straw in order to be truly fair. But to be honest, the vault dwellers were simpy terrified of going outside, and terrified people do not always make the wisest decisions. 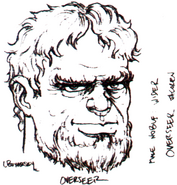 Jacoren in the Vault 13 command center 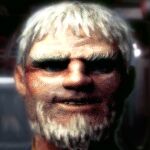