The Jacobstown lodge is building in Jacobstown in 2281. It is the home of Doc Henry, Marcus, Calamity, Keene, Lily, and several super mutants and nightkin.

The lodge is the most prominent building in Jacobstown. It is a large, two-story building, due west of the main entrance to the town. The bungalows are situated to the north and a bighorner pen can be found to the south, where Lily can be found tending to the animals. Super mutants mill around a patio near the entrance, where benches and picnic tables are located. A dried lakebed takes up the majority of the area between the main entrance and the lodge.

Immediately inside the entrance, the nightkin Keene stands. A check-in desk is flanked by two sets of stairs to a loft area. The desk has a terminal, a coffee pot and cups to the side, and the Mt. Charleston snowglobe sitting in the middle.

Behind Keene is a pool hall, with four pool tables and three cabinets. Two of the cabinets have pool equipment, including pool cues and pool balls. There are two 5-balls, two 10-balls, one cue ball, and one 8-ball. A few pool cues are also located on the tables themselves.

Moving counterclockwise from the entrance, one will find Doc Henry's lab, where Calamity works alongside him. A deceased night stalker rests on a gurney to the right of a large fireplace. A main research area is set up in front of the fireplace, with two specimen jars, a chemistry set, microscope, and various other pieces of equipment. Doc Henry and Calamity will take turns using this area, primarily shaking and contemplating chemistry flasks. Two queen size beds take up another corner, across from a terminal, and several gurneys are stored next to the entryway behind room dividers.

There are six rooms in two hallways off of the main lobby. The hallway on the laboratory side has three rooms, comprised of several queen sized beds and makeshift bedding on the floor. In the middle room, there are sensor modules next to a pre-War book. In the last bedroom, there is an owned footlocker holding recon armor.

In the hallway closer to the pool hall, there are three rooms, of which one is a kitchen with random foodstuffs in the refrigerators. The other two bedrooms have makeshift beds, empty footlockers, a carton of cigarettes, and several coffee cups. Both hallways end in dead ends.

There are 14 total rooms on the second floor, which are situated around a U-shaped hallway with entrances off the lobby loft. Opposite of the hallways, an exterior door leads to a balcony overlooking the main courtyard.

In the leftmost branch of the hall, there are four rooms. The room nearest the gentlemen's restroom has an owned dresser containing a dose of Hydra. The room with the chemistry set has a teddy bear on the bed, and the room directly off of the lobby has an Average locked safe, two owned ammunition boxes and footlocker containing 75 energy charge packs and 30 energy cells.

In the middle hallway, parallel with the lobby, there are six rooms. The first of three on the left has a significant number of chems and accessories, including surgical tubing, three bottles of Buffout, one box of Mentats, and two doses of Rebound. On one of the dressers and on the bed, there are several empty syringes alongside four doses of Fixer.

On the other side of the hall, a room with the only pinball machine in the game can be found, although it is not operational. The remaining room has a sparring dummy, a pair of roller skates that cannot be moved or acquired, an owned copy of Boxing Times, a bottle of Buffout, and three bobby pin boxes on the dresser. The room adjacent has an owned copy of Programmer's Digest and Fixin' Things.

In the rightmost branch of the hall, the last four bedrooms are located alongside the ladies' restroom. From the restroom, the first bedroom contains various radio equipment, a weapon repair kit, and a hula girl next to a harmonica. Adjacent to this room is Marcus' room, secured with an Average lock. He has tidied his room and decorated with a globe, sitting area, and reading nook. A dose of Turbo and a carton of cigarettes can be stolen from the dresser.

The two bedrooms immediately before reentering the lobby area contain several toppled shelving units and various detritus. A copy of Lad's Life is found on a bed, along with two scalpels, two pairs of forceps, a bonesaw, and two tweezers. An owned doctor's bag is situated alongside the bed, next to ammo boxes containing 30 energy cells and 82 containers of flamer fuel. Across the hall, one can steal some sexy sleepwear from the dresser.

The Jacobstown lodge is similar in appearance to the real world Retreat on Charleston Peak (formerly the Resort at Mount Charleston), including a nearly identical front sign, similar architecture, and inclusion of proximal ponds, interior fixtures, and fountains.[1]

Close up of the snow globe 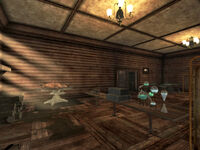 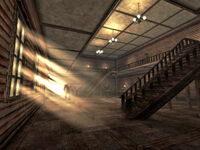 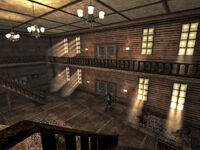 Lobby seen from the stairs 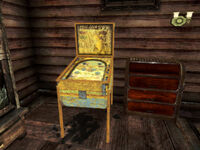 The pinball machine, upstairs in the middle hallway bedroom 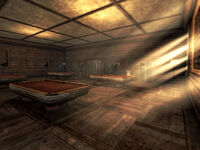