The Jacobstown bungalows consist of seven cabins within close proximity to one another, three of which are accessible, on the western side of Jacobstown in 2281.

The northernmost bungalow has an Average locked door. There is a service rifle and ammunition on the mantlepiece and an unowned bed.

The middle bungalow is notable due to the playing cards and poker chips on the table to the left of the entryway. The bungalow to the south has about the same setup as the others, including a bed, table, couch, and a bathroom.

The Jacobstown bungalows appear only in Fallout: New Vegas. 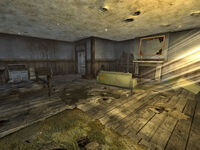 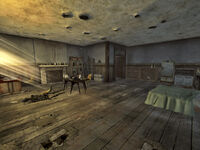 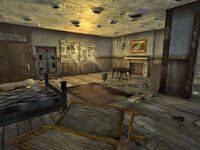 Grognak the Barbarian and Nuka-Cola Victory

Dino toy on the mantle

Five of a kind!