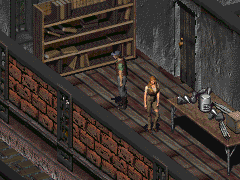 “We all pretend that this is a civilized town, that we're all on the up and up... but we all live in fear of the mutant rage. Each day, there are fewer and fewer humans.”

Jacob the Chemist is one of the human inhabitants of Broken Hills in 2241 and a leader of the anti-mutant conspiracy.

He is named after Jacob, the Brotherhood knight who co-founded the town. His wife, Aileen is also a chemist and a member of the conspiracy.

* Jacob cannot use this weapon because he does not have SMG frames for it.

Jacob the Chemist appears only in Fallout 2.

Retrieved from "https://fallout.fandom.com/wiki/Jacob_the_Chemist?oldid=3089082"
Community content is available under CC-BY-SA unless otherwise noted.