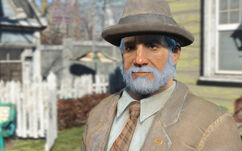 Jacob Orden is the mayor of Covenant in 2287.

Jacob Orden is the mayor of the small settlement of Covenant. In secret, his town worked with the Compound to find synths who were hiding as humans by making them take the "G.O.A.T. test," renamed the "SAFE test," which could expose synths through a difference between synth and human psychology.

Soon before the Sole Survivor wakes up in 2287, Jacob Orden and other members of the town raided a caravan because they suspected the daughter of the caravan owner was a synth. This prompted Honest Dan to start an investigation in the town.

While the player character is investigating Covenant during the Human Error quest, he will deny any involvement with the Compound or the caravan. He will even attempt to bribe the player character to stop snooping around, which can be taken with adverse effects. By hacking into Jacob's terminal in his room, one can uncover the secret relationship of the compound and Covenant.

If Amelia is set free, Jacob will become hostile to the player character and, after he is dead, Covenant will allow the Sole Survivor to use the workshop, enabling it as a settlement. In contrast, if Amelia is left locked up, speaking with Jacob allows the use of the workshop.

Jacob Orden appears only in Fallout 4.

Retrieved from "https://fallout.fandom.com/wiki/Jacob_Orden?oldid=3289583"
Community content is available under CC-BY-SA unless otherwise noted.