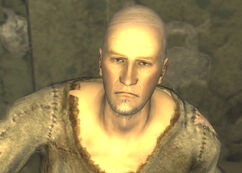 “Thank God! I thought I was going to die if you didn't come back soon. I'm going to head to the Followers' fort to get some rest and detox. You've saved my life, friend.”

Jacob Hoff is a former chemist living in Freeside in 2281.

Jacob Hoff is a natural at chemistry, who used his talents to homebrew detox chems before he became a junkie himself while working for the Garrets.

There are three options for helping Jacob get clean during the quest High Times, once Dixon is no longer selling him drugs:

Retrieved from "https://fallout.fandom.com/wiki/Jacob_Hoff?oldid=3498863"
Community content is available under CC-BY-SA unless otherwise noted.