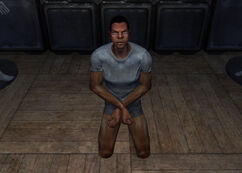 Jacob was one of many guards employed by the Van Graffs at the Silver Rush. For a time, him and Gloria Van Graff, his boss and owner of the Silver Rush, where a couple. That was until Gloria found him at Gomorrah employing one the prostitutes. Afterwards, Gloria kidnapped him and kept him in the Silver Rush to then use as a test to show the effectiveness of their energy weapons to Mister Soren.[2] Jacob was also stealing caps from the Van Graffs behind the backs of his bosses, Gloria knew of this but didn't punish him until he slept with another woman.[3]

Jacob has no interactions with the player character and is only seen during the Van Graff introduction getting executed.

Retrieved from "https://fallout.fandom.com/wiki/Jacob_(Fallout:_New_Vegas)?oldid=3109219"
Community content is available under CC-BY-SA unless otherwise noted.