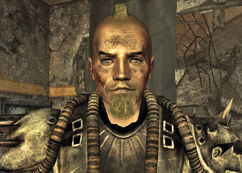 “Well then, I hope you also said goodbye! HAHAHAHA! Alright, play time's over. Get to work, grinders.”

Jackson is a Pitt raider from the Pitt in the year 2277.

Jackson was born in 2257. Seedy even for a Pitt raider, Jackson hangs around the toilets near the Vertigo Bar and Grill, looking for his next jet fix. When he is not roaming the catwalks, he is ordering Midea around and is responsible for finding new victims to go on steel ingot scavenging missions.[1]

Jackson appears only in the Fallout 3 add-on The Pitt.

Retrieved from "https://fallout.fandom.com/wiki/Jackson_(The_Pitt)?oldid=3347364"
Community content is available under CC-BY-SA unless otherwise noted.