BeardMix03a
“We are a family of dreamers, a band of astral explorers, and a church, of the mind.”

Jackson leads the tribals in the Ark & Dove cathedral in 2277.

Jackson was not born with "the look." While a young man, however, he discovered a strange device in the wreckage of a ship. While examining it, he inadvertently activated a long-dormant power source connected to a holographic head. Jackson, deeply superstitious, interpreted this event as the manifestation of a powerful spirit. Jackson would return here with increasing frequency to "commune" with the spirit. This disembodied head, in reality, is a sentient person. During Jackson's séance encounters, he would be given instructions.[Non-canon 1][clarification needed]

Thanks to the efforts of followers who slowly began appearing in Jackson's presence, along with the piecemeal guidance he passes along from his "visions" of the brain, the tribe has set up a surprisingly effective hydroponics system to grow large quantities of punga fruit. This harvest, thanks to Tobar's service as a trader, draws a steady trickle of fresh blood into the area, thanks in large part to the addictive properties of the plant. These entrepreneurs and addicts often wind up inducted as new tribe members.[Non-canon 1]

Hearing Voices: Jackson has to be talked to in order to gain more information about the tribals and their ways.

The only interaction with the player character is during the Hearing Voices quest where one has to talk to Jackson.

Jackson appears only in the Fallout 3 add-on Point Lookout. 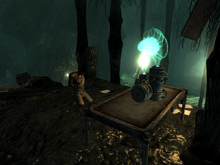 Jackson in the sea cave