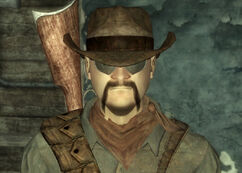 Can You Find it in Your Heart?
Heartache by the Number 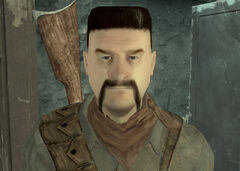 “Looks like we got a new visitor in the ol' Brahmin pen. Not many people coming here in a hurry, only passing through.”

Ranger Jackson is a NCR Ranger and the commanding officer of Mojave Outpost in 2281.

Ranger Jackson is a downbeat Ranger who likes to do things by the book. He has the best interests of the NCR at heart but doesn't believe in taking any action unless he has gotten the orders signed and sealed through the chain of command.

Retrieved from "https://fallout.fandom.com/wiki/Jackson_(Fallout:_New_Vegas)?oldid=3124391"
Community content is available under CC-BY-SA unless otherwise noted.