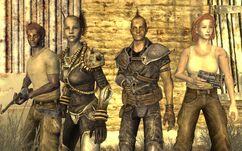 Jackal gang leaders are members of the Jackals gang Mojave Wasteland in the year 2281. They are found leading "gangs" of weaker Jackal gang members, and they're most often better equipped than their minions.

The Jackals are one of the three raider gangs that originated from the inhabitants of Vault 15 (the others being the Vipers and the Khans). The Jackals are a very weak group of raiders in Fallout: New Vegas, having been reduced to a shadow of their former strength by the lawbringing forces of the NCR.

Jackal gang leaders are mostly better equipped than their minions, as well as boasting more impressive combat skills and health. They will mostly be dressed in either leather armor or metal armor, and carry more powerful weapons than their minions, such as cowboy repeaters and, in some cases, grenade rifles.

Jackals are hostile towards most other Mojave Wasteland inhabitants, including the Courier and even other raider groups such as the Powder Gangers and Vipers. They are mutually neutral towards giant mantises, which infest some of their hideouts such as the Nevada Highway Patrol station.

In their weakened state, the Jackals generally lack the resources to patrol the Mojave, and are usually only encountered at specific Jackal hideouts, most of which are in the southwest quadrant of the world map.

In total, five leaders appear in-game. Of these few leaders, only two have a randomly generated appearance. One is found just outside of the Ivanpah race track, near the entrance to Nipton. The other is located outside of the Prospector's Den.

Three other leaders exist, but unlike the previous two, they have unique models and can only be fought once as they do not respawn. The following is a list of these characters:

Retrieved from "https://fallout.fandom.com/wiki/Jackal_gang_leader?oldid=3289795"
Community content is available under CC-BY-SA unless otherwise noted.