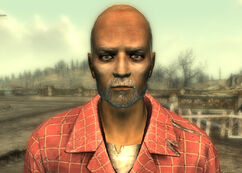 “We win town of the year every year, we've got no end of food, and no troubles at all.”

House-proud and vehemently opposed to outside influences, the Smiths are a strange but reasonably friendly bunch. Jack seems to be Andale's patriarch, and he knows the best little town in America is here, where Linda bakes a delicious meat pie![1]

Presenting himself as a loyal U.S. citizen and father, Jack and his wife (and sister) Linda have a son Junior Smith. While his wife cooks and cleans the house, he goes to work with his neighbor (and brother) Bill Wilson in the "family business." In this enterprise, they preserve and maintain a centuries-long local tradition: cannibalism. Wastelanders passing through are allowed by the local families to stay in town and become accustomed to the warm attitude and reception of them. This facade is meant to catch the travelers off-guard when they are killed by the residents.

Retrieved from "https://fallout.fandom.com/wiki/Jack_Smith?oldid=3151045"
Community content is available under CC-BY-SA unless otherwise noted.