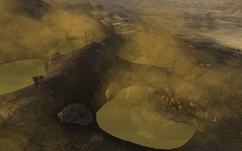 Jack Rabbit Springs is a highly irradiated location in the Mojave Wasteland in 2281. It is located south of the Prospector's Den and northeast of Ivanpah Dry Lake.

There are five irradiated hot springs around a small hill in the center. Two poles emerge from the center area. Next to the poles are some ammunition boxes and other loot, including a weapon repair kit and a dose of Hydra, located next to the Stealth Boy on the small hill with the poles. The area is highly irradiated and it is advisable to bring some type of radiation-resistant clothing such as the radiation suit and health items such as Rad-X and RadAway when exploring.

The area is populated by centaurs, evolved centaurs and up against the mountains at a camp, a super mutant master armed with a heavy weapon. It may also have an additional super mutant or super mutant master backing it up. Upon arrival via fast travel, the player character may find a bighorner calf that has been ambushed by giant ants.

A Stealth Boy - Located on the small hill with the poles.

Ambushed bighorner calf (ants were alive but were killed in action)
Add a photo to this gallery
Retrieved from "https://fallout.fandom.com/wiki/Jack_Rabbit_Springs?oldid=3324365"
Community content is available under CC-BY-SA unless otherwise noted.
... more about "Jack Rabbit Springs"
RDF feed
Has platform
PC +