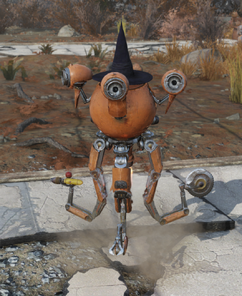 “So many pumpkins to carve, so little time.”

Jack O' Lantern is a Mister Handy operating as caretaker of the Pumpkin House in Appalachia in 2103.[1]

According to the pumpkin carving automation notes found inside the pumpkin house, several robots were re-programmed by the proprietors to carve jack o' lanterns for the coming Halloween. The Mister Handy designated as the greeter was given the name "Jack O' Lantern." Even long after the Great War, Jack continues to maintain the property due to a Priority 0, designating his task and mandate as: Gather pumpkins and prepare for the festival."[2]

It is unclear if he is the only of the reprogrammed Mister Handies to be painted orange, as there is no evidence of other robots of any sort around the pumpkin house.

Retrieved from "https://fallout.fandom.com/wiki/Jack_O%27_Lantern?oldid=3217078"
Community content is available under CC-BY-SA unless otherwise noted.