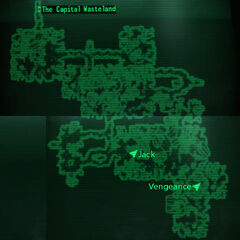 Jack is a unique variant of the uncommon melee weapon, the Ripper. It is equal in power per single hit to its cousin, but has a higher potential damage rate, due to its slight but noticeable boost to the critical hit rate. It also does an extra 50% damage against limbs.

The higher critical chance increases the power of this weapon enormously because it hits over 30 times per second. The listed weapon damage is divided over the individual hits, but the critical bonus damage is not. This means every hit has a normal chance to critical and do the full critical bonus damage. If one performs a sneak attack critical with the Better Criticals perk while holding this weapon, they have the chance to do a brutal 60+ damage hit 30 times a second

This weapon's name is a reference to Jack the Ripper, a notorious serial killer who hunted London prostitutes in the late 19th century. This weapon's Edit ID in the G.E.C.K. is also "WeapUniqueJackTheRipper."

Retrieved from "https://fallout.fandom.com/wiki/Jack_(weapon)?oldid=2907647"
Community content is available under CC-BY-SA unless otherwise noted.