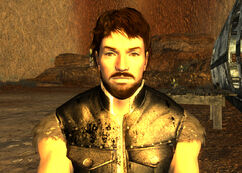 “Do? We don't, like, do anything. We make the magic happen.”

Jack is an easy going drug dealer, or "drug supplier" as he prefers, for the Great Khans living at the Red Rock drug lab in 2281.

Jack and Diane are advisers to Papa Khan. The pair run a drug trafficking ring, supplying both their own group and those in the surrounding region with chems. Jack learned chemistry from the Followers of the Apocalypse when they visited the Great Khans and uses this knowledge to produce the drugs, while Diane handles the business end of the operation.[1]

Regis tells the Courier that the pair has been looking out for one another since they were kids, and any mention of harm coming to Diane results in anger from Jack.[2][3][4] Despite this, when comparing the two, Anders shares that although Jack and Diane both come up with ideas, Jack always has the "soft touch" compared to Diane.[5]

Jack is an easy-going individual and is open to speaking with the Courier, focusing less on topics of tribal culture than the other Great Khans. He is also sympathetic, not only showing care for Diane's well-being, but also that of Jerry the Punk.[6] Jack disapproves of calling him the nickname and explains that he is just "a sensitive soul that needs some love."[6]

Jack and Diane's names may be a reference to the John Mellencamp song, "Jack & Diane."