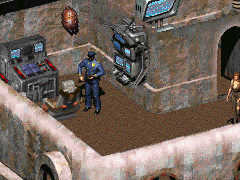 Jack is the assistant deputy of the NCR law in 2241.

Jack is wound tighter than a watch spring. His jaw is permanently clenched, the veins stand out on his forehead, and there's not a spot of joy or happiness anywhere on him.[1] Once an upstanding officer of the law in NCR. Jack's life took a turn for the worse when his marriage with Mira crashed horribly. His wife managed to coerce the court into giving her almost everything they worked together for and that still wasn't enough - she wanted him dead. Jack has since gone deeper and deeper into depression, building up anger inside him.

One day in the 2240s, he finally snapped, and after grabbing a brick of plastique, he wired himself to the town's power generator, threatening to blow himself and the generator to kingdom come.

"Take care of Officer Jack" for Mira - Jack is first encountered as he threatens to blow up the NCR power plant. Several options are available for dealing with him: one, reason, though unlike most, only the most hostile dialogue options will make him reconsider his position. Second, he can be shot and killed, which will displease Dorothy, as she understood that the poor man snapped due to pressure. Last, he can be allowed to blow up and the city generator either fixed or left disabled (energy fields throughout the city go down as a result).

* Detonates and kills Jack. Talking him down or killing him before he explodes will result in these still being present in his inventory.

Jack appears only in Fallout 2.

Retrieved from "https://fallout.fandom.com/wiki/Jack_(Fallout_2)?oldid=3303107"
Community content is available under CC-BY-SA unless otherwise noted.