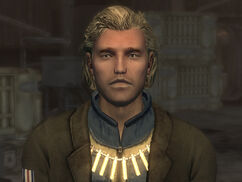 “Oh, my sweet blameless Red! Curse the walls of Nellis! Curse our guns and isolation! Her blood is on our hands! Only if we stop shelling everyone who comes close will some good come from this tragedy. If you'll excuse me...”

Jack is a Boomer living at Nellis Air Force Base in the Nellis hangars in 2281.

Jack is one of the younger Boomers at Nellis. He is the apprentice of the aging mechanic Loyal and as such, spends a great deal of his time at the base's hangars helping his boss. In his free time, Jack looks out into the wasteland with his binoculars in the hope of catching a glimpse of Janet, one of the Crimson Caravan Company's employees whom he has a crush on.

Retrieved from "https://fallout.fandom.com/wiki/Jack_(Boomer)?oldid=3242234"
Community content is available under CC-BY-SA unless otherwise noted.