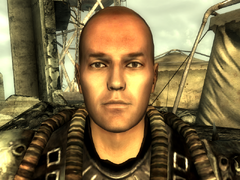 Jabsco without his helmet

Commander Jabsco is the leader of the Talon Company mercenary organization in 2277.

Leader of the Talon Company mercenaries, Jabsco says he has proved his worth in the combat zone countless times, although his troops haven't seen evidence of this. Nor are they likely to; Jabsco plans attacks on all foes from a bunker deep within Fort Bannister. Face him with considerable force, and you may see why his critics have dubbed him "Jetting Jabsco" for his tendency to flee combat.[1]

Killing Commander Jabsco before completing the Take it Back! main quest will prevent the occurrence of a special encounter in the Broken Steel add-on, in which Paladin Jensen and a squad of Brotherhood of Steel paladins launches an attack on the Talon Company forces around Fort Bannister.

Commander Jabsco appears only in Fallout 3.

Retrieved from "https://fallout.fandom.com/wiki/Jabsco?oldid=3519593"
Community content is available under CC-BY-SA unless otherwise noted.