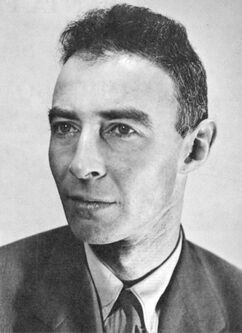 Julius Robert Oppenheimer was a scientist who is best known for his work on the first nuclear bomb.

Oppenheimer was an American theoretical physicist and professor of physics at the University of California, Berkeley. He is among the persons who are often called the "father of the atomic bomb" for their role in the Manhattan Project, the World War II project that developed the first nuclear weapons.

Oppenheimer's notable achievements in physics include the Born–Oppenheimer approximation for molecular wavefunctions, work on the theory of electrons and positrons, the Oppenheimer–Phillips process in nuclear fusion, and the first prediction of quantum tunneling. With his students he also made important contributions to the modern theory of neutron stars and black holes, as well as to quantum mechanics, quantum field theory, and the interactions of cosmic rays.

Retrieved from "https://fallout.fandom.com/wiki/J._Robert_Oppenheimer?oldid=3334326"
Community content is available under CC-BY-SA unless otherwise noted.