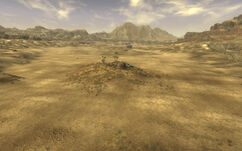 Ivanpah Dry Lake is a location in the Mojave Wasteland. Located to the south of Primm and to the east of the Nevada Highway Patrol Station.

Its main feature is a small hill with a harvestable honey mesquite pod and a burned-out car. Between the car and the rocks is a stash toolbox, and the car itself has a suitcase inside.

Many bark scorpions can also be found in the general vicinity, along with some barrel cactus and jalapeño pepper plants. There are also a number of giant ants patrolling the area, due to the proximity of Ivanpah race track to the south-southeast.

Retrieved from "https://fallout.fandom.com/wiki/Ivanpah_Dry_Lake?oldid=1529388"
Community content is available under CC-BY-SA unless otherwise noted.